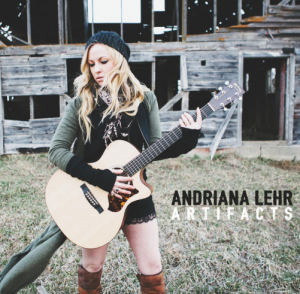 Andriana Lehr’s journey from a South Dakota farm to the Minneapolis/Saint Paul area has been propelled by musical, vocal, and writing talent that’s virtually unparalleled by anyone in her generation. She has the sort of transformative voice that could elevate mundane lyrics to the level of performed poetry, entwine itself around relatively non-descript arrangements and make them sound iconic, while still conveying a wealth of personality and emotion. Fortunately, for Lehr’s listeners, the lyrics on her second album are never mundane while the arrangements are rich with musical inventiveness and fearlessness. This ten song collection represents Lehr’s fullest realization yet of her considerable talent. It also remains accessible to a wide cross-section of possible listeners and has the style and sophistication of a much older, more seasoned performer. This is certainly reflective of the time and live appearances Lehr has logged in venues throughout the Minnesota area; her growth has been exponential and will likely continue to be so on future releases.

Artifacts, however, is our focus here. It opens with a great track, “Outrun the Change”. The song is full of restrained, introspective atmosphere from the opening strains and it never pulls back from that. Lehr’s writing, however, gets a sympathetic treatment from her collaborators and the result is that the atmosphere never sounds labored or overwrought. “Ashes in the Fog” sounds very similar to the opener, in some respects, but the lyrical material has a much more poetic slant than the opener. Despite the added intricacy of language and symbols, it remains a direct composition that doesn’t shoot over the listener’s heads with pretension and straining for effect. The fleet footed shuffle of “Catch 22” is probably the most unambiguous nod to a particular genre on Artifacts and its solidly classic country sound gets an appropriately soulful vocal from Lehr. “Bright Yellow Lights”, however, culls from a variety of genres to achieve its final form and ranks among the best tracks on this album thanks to its imaginative synthesis.

“Halfway Home”, however, takes the culling heard in the aforementioned track to a new level. Its neoclassical overtones match up quite well with the dependable structure she adopts for the song, but it’s the sensitivity of her vocal and the fine words she writes for this composition that ultimately set it apart from the remainder of the album. Some of those neoclassical tones return, in muted fashion, on the song “Putting Up a Fight”, and they sound much more expected in a piano-driven ballad. Nonetheless, Lehr’s willingness to bring an assortment of instruments to bear on what might normally be classified as an album in the Americana tradition marks her as a different breed of cat when compared to many of her less adventurous contemporaries. “Since You’ve Been Gone” is a little weaker than the other songs for some unexpected reasons – this feels a little more formulaic than what we’ve grown accustomed to and follows a cataloging style for its lyrics that feels like she’s coasting a little. The album’s second to last track, however, brings us back to the same bravery that has distinguished much of Artifacts. “Streets of Saint Paul” is, lyrically, undoubtedly torn from the pages of Lehr’s life, but it’s a musical adventure that finds her bringing her folk singer tendencies into perfect alignment with an ever growing musical imagination. Artifacts is one of the year’s most challenging releases, but it’s never experimental and the ability of listeners to connect with the material is unfettered by her attempts to broaden and stretch her approach.