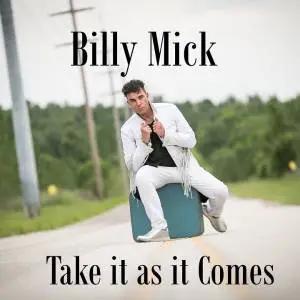 Minneola, Florida – January 22, 2020 – When Billy Mick decides to go from something, he’s all in. Last year he began his musical journey releasing a handful of singles including the addicting and invigorating “Flesh and Bone” and “Angel.” Now he’s kicking off 2020 with his latest release “Take It As It Comes.”

High energy from the start, “Take It As It Comes” is a powerhouse. Billy Mick’s vocals deliver a rugged and revitalizing vibe as he transforms from a musician to an adrenaline-charged storyteller. On par with the likes of Adam Lambert and P!nk, Billy Mick bridges the gap between pop and rock with ease.

While he sounds like a veteran of sound, Billy Mick is still new to the game but his journey to the present started several years ago. It was then he fell incredibly ill. So much so he was hospital bound for three months. During that time he vowed that if he got out, he’d pursue his musical endeavors. It took some time, but after attending Manchester Pride in 2018 with his husband, Billy was inspired by the overwhelming sense of community and acceptance he experienced as he watched the performers take the stage. That was the ultimate turning point and since then Billy Mick has played at Orlando’s Miss GayDays Pageant and at Space Coast Pride, released several singles and has an album on the way.

Those interested in adding new pop to their playlists, featuring “Take It As It Comes” on their site, or interviewing Billy Mick can reach out via the information provided below.

About:
Billy Mick has faced difficult lows and felt inspired by incredible highs, all of which culminated in him finally stepping into the spotlight and pursuing his musical dreams. To date he has seven singles to his name, including his 2020 release, “Take It As It Comes.”