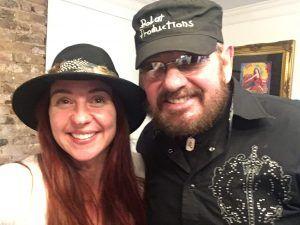 Sacramento, California – May 5, 2020 – Bo Ely is an accomplished songwriter and skilled harmonica player who teamed up with Nashville’s own Caitlin Evanson for his latest single, “One Man Band.”

From the press of play “One Man Band” invigorates the soul. Caitlin Evanson’s fiddle paired with Bo Ely’s harmonica is nothing short of perfection as the instruments’ marriage is seamless. This song as music that makes the country realm smile, and vocals that warm the heart. Caitlin Evanson’s voice does wonders with Bo Ely’s words that paint a telling picture of life on the road. It also makes one hope that these two have more projects in the future because their first is superb.

Bo Ely has always considered music his lifeline; from his days bouncing around his crib to whatever was playing in the house to the records, he danced to as a teen. He eventually learned that he sucked at the accordion, but wasn’t deterred from music forever. He and his friends started a band – the guitar was not his forte either. Eventually, all of that led him to realize his skills on the harmonica, as well as in the songwriting department. Which led him to Caitlin Evanson, who has toured the world with her violin on tours with the likes of Taylor Swift, Keith Urban, and more.

Those interested in adding new music to their AC or country playlists, featuring “One Man Band” on their site, or interviewing Bo Ely for their site, podcast, or radio show can reach out via the information provided below.

About:
Bo Ely brings so much to the table with his heartfelt debut single, “One Man Band.”