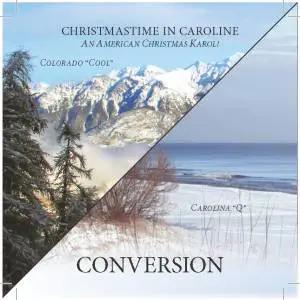 Denver, Colorado – November 5, 2019 – Instead of Choosing Bing or Elvis, Conversion’s “Christmastime In Caroline” delivers both!

The #1 ranked Colorado Christian Rock band on ReverbNation for the past year, spending many weeks as well in the national top ten, reaching as high as #6 nationally and globally, Conversion has also won kudos in the annual “Song of the Year” contest out of Nashville: two Semi-Finalist and one Runner-up award with songs from their 2018 debut, double-CD album, ‘American Psongs.’ Now the band is ready to take on Christmas with their brand-new twin spin, “Christmastime In Caroline,” available on their new CD featuring both “Colorado Cool (White)” and “Carolina Q (Blue)” versions; one Christmas song with a second helping of Christmas cheer!

Conversion’s rockabilly music, whether traditional or holiday driven, is all about bringing God’s peace to the world, one song at a time, for one person at a time. The band recognizes that while there is no easy, quick-fix solution or “magic bullet” for America or World Peace in our time, even at Christmastime – they strongly believe that, as a Christian band, they are obligated to reach out and help all of humanity with their “White” and “Blue” Christmas music that it can be enjoyed by everyone with its simple Christmas message of God’s love and brotherhood for all; uniting the world through American Psongs that glorify God.

Those interested in adding new Christian Holiday music to their playlists, featuring the song on their site, or interviewing Conversion can reach out via the information provided below.

About:
As a Colorado-based band with South Carolina roots, Conversion has been able to create music that offers the best of both worlds, offering a mix of smooth Colorado jazz with down-home, hoedown worthy bluegrass. As a Christian Rock band, Conversion is also interested in creating music around the major Christian holidays like Christmas and Easter; in fact, during Easter 2019, they released their very first holiday single, “An American Easter (The Joy of Mary M),” a bluegrass instrumental that expresses – without saying a single word – the experience of Mary Magdalene’s joy on Easter morning upon discovering that she was speaking with Jesus Christ himself. Now they’re looking to spread holiday cheer throughout winter with two versions of their Christmas Psingle, “Christmastime In Caroline.”