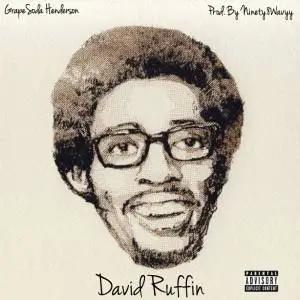 Carrollton, Georgia – October 29, 2019 – When it comes to ending the year with a bang, look no further than GrapeSoda Henderson’s “David Ruffin.” A sick track by a rising emcee that’s bound to make waves on both the airwaves and blogosphere.

GrapeSoda Henderson started to show promise as a wordsmith when poetry entered his life early on. Once he put that alongside the influence the likes of Dr. Dre and Eryka Badu had on him, there was no turning back in 2011. Since then he’s released a cascade of dynamic tracks, including “Honey Bun,” “Top Off,” and his latest “David Ruffin.”

“David Ruffin” is his first release since his 2018 EP, Fantana Grape, and it’s far from his last. So those interested in adding new fierce hip hop to their playlists, featuring “David Ruffin” on their site, or interviewing GrapeSoda Henderson can reach out via the information provided below.

About:
GrapeSoda Henderson caps 2019 with the release of his new single, “David Ruffin.”