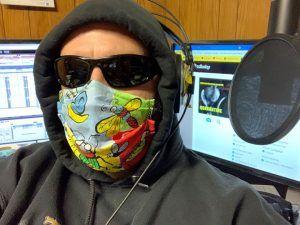 Bloomington, Minnesota – May 3, 2020 – No one on earth is without a story. Even a baby born a minute from now has the tale of how their parents met and eventually made them. For some, our stories are bare bones. The basics of human existence, but for others like Eric Roy Brustad, their tales have a myriad of layers; from adoption to addiction to audible realizations, this is Eric Roy Brustad, otherwise known as FUOWG.

Given up for adoption as a baby, FUOWG found his forever family as an infant and through various moves as an only child found himself continuously making friends. One would eventually lead him to rap music. He’d later go off to study audio engineering, learn to DJ, and even work alongside Louie Anderson. While he had a lot of good though, that’s only half his story. Addiction soon found him at the bottom of the barrel for several years. Thankfully, by 2008 he was married, clean, and focusing on bettering himself.

Today, FUOWG is ready to make his presence known. He has already dropped a handful of singles in 2020, and with a definite style that stands apart, but is always changing fluidly FUOWG always creates with his past, present, and future in mind. “Back in the Day” notes about the importance of learning from your past. Something he knows all too well as he recognizes his darkest days and doesn’t want to hit those low points ever again. Then of course, “Quarantine” is about the world’s current situation. His newest song, “Gotta Tap,” has yet to be released but will be a track that comforts those who have faced addiction.

FUOWG hasn’t had the most ideal life, but he has taken the cards he’s been dealt, shaking things up a bit with big bets and has lost some, but also won with his marriage, business, and flourishing rap career. With his focus set on making a name for himself in the rap game, the sky’s the limit for this creative force that has yet to falter under the pressures of his reality.

Those interested in adding new rap to their playlists, featuring any of FUOWG’s singles on their site, or interviewing FUOWG for their site, podcast, or radio for can reach out via the information provided below.

About:
It was early August 1972. A 15-year-old girl had just given birth to a baby boy. The father, 10 years or so her senior, was nowhere to be found. After weighing her options, she handed her baby over to the state. Five months later Eric Roy Brustad found his forever home. As their only child, Eric found himself continuously making new friends as the family moved from Arizona to Minneapolis to Georgia and back to Minneapolis once more. Along the way, he befriended a young man by the name of Rodger Kane. It was that friendship that ultimately led Eric to be FUOWG. It was the late ‘80s when Kane transferred in from California. With him, he brought creative endeavors and a cassette tape of “Miami Bass.” Eric would soon borrow it and become enamored with the various hip hop tracks coming from his walkman.

Unfortunately, Rodger Kane wasn’t the only friend who influenced Eric. Feeling the angst of being a teenager, he found solace in a group of outcasts. Together they smoked whatever they could get their young hands-on, played their music too loud, and eventually, Eric would succumb to even worse temptations as he got older. His birth mother is said to have had her own inner demons when it came to addiction, and Eric would later face his own demons later in life.

After Rodger Kane came to be, Eric started to get deeper into music. He entered local contests, talent shows, and even got on stage at a couple of local bars. Soon enough he found his love of being behind the turntables and from there learned how to entertain as a DJ as well. Soon enough he found himself attending The Audio Recording Program at Hennepin Technical College where he met Adam Colt. Colt was his teacher and later his partner on a children’s album Eric helped write, produce, and engineer. As the years continued to add on, Eric stayed on his DJ game and rapped when he could. Eventually, he got a job at a gentlemen’s club. It wasn’t long until Eric’s life would be turned a little topsy turvy.

By the end of the ‘90s, Eric was in deep when it came to his narcotic addiction. He wanted nothing more than to work on his album, ‘Crackhead Dead,’ but over several years he wound up behind bars three times. In between jail stints, a man by the name of Adam Colt saw promise in FUOWG and offered him the opportunity to pen a track for comedian Louie Anderson. After hearing Louie loved it and wanted to shoot a video for it, he sent an 8×10 to FUOWG’s parole officer asking for permission for FUOWG to be able to fly to Las Vegas for it. Permission was granted and it still sits high on FUOWG’s accolade list.

Two years after meeting his now-wife, Amanda, FUOWG got clean and started working construction. He did that for several years before starting his own limo company; Erix Coach and Car Transportation. Today Eric, or rather FUOWG, is ready to impress the world with the skills he always knew he had inside of him. He has already dropped a handful of singles in 2020; “Everything Is Alright,” “Quarantine,” and “Back in the Day (Radio Mix).”