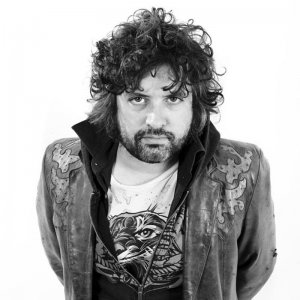 John Wesley Coleman III, longtime member of garage rock favorites The Golden Boys, has grown in talents and reach in recent years. There’s a gathering assurance in his performances and songwriting that’s grown out of the great raw talent listeners heard on his earliest releases and collaborations. This gradual refinement and deepening of creative vision is every artist’s goal, but there’s an added greatness about music like this. Microwave Dreams is full of inspiration, never overstays its welcome, and has a natural progression reflecting the control and certainty behind Coleman’s work. If you haven’t heard this guy yet, it’s time. These are ten songs covering a wide spectrum of musical styles, lyrical slants, and points of view. Some of the songs keep up a straight-forward approach, but others tinker with or throw listener’s expectations overboard without ever going so far off the rails and risking incomprehensibility.

“On the Couch Again” is the album’s first real gem. Some alt-rock posturing begins the album on “Shovel”, but Microwave Dreams’ second song is such an unique hybrid of various approaches that it’s impossible to skim over. The arguable highlight of the song is Coleman’s singing and lyrics. The incongruous details, lifted wholesale from reality, have great specificity and bring listeners in to the singer’s point of view thanks to the easygoing manner of his voice. “Hang Tight” blisters the skin with its brawling guitars, hammering drums, and aggressive Coleman vocal. It’s never an exercise of bash and thud, however – there’s something in Texas songwriters like Coleman that prohibits anything like that and audiences can thank their lucky stars for it. Another bright gem on Microwave Dreams is “Jesus Never Went to Junior High”, a gloriously whacked out tribute to golden oldie rock complete with the requisite sax blowing away in the background. It isn’t a hollow imitation though. Coleman uses the style as a great vehicle for another personal-sounding lyric and his burned out vocal has unquestionable, if surprising given the content, sensitivity.

“Scarecrow Smile” has dark beauty. It opens with a bit of sound effects, but the music soon comes in and listeners are treated to one of the album’s most haunting performances. The lyrical content is excellent evidence of the same talent that’s enabled Coleman to experience some success as a published poet. He’s back in much more commercial territory with “Exotic Tambourine”, but even when he’s at his most recognizably mainstream, Coleman’s spirit and approach remains subversive. This track has a great, rousing sweep that many will like. “See You Tomorrow” is a late rock-inspired gem on Microwave Dreams with a heavy rhythm section and a great vocal from Coleman. Little that comes before on this album prepares people for the ending. “We Care About Love” throws caution to the wind and flies high on the strength of Coleman’s piano playing and spirited singing. The lyrics aren’t particularly intricate, but they are a perfect match for the song and he puts everything into it that he can muster. It’s an eye popping ending to an album that works from the beginning to end and never dips in quality.