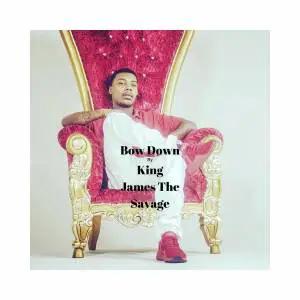 Houston, Texas – November 26, 2019 – King James the Savage is looking to stay on the right path with music guiding him towards the top of the mountain and at the head of it all, his debut single, “Bow Down.”

“Bow Down” is sure to heat up playlists far and wide during these winter months. A force from the press of play, King James the Savage puts years of struggle behind him as his past pushes him forward with this incredible audible experience. Available on all streaming platforms, as well as for purchase on iTunes, Amazon and beyond – the world is about to indeed “Bow Down” to this Texas royalty.

King James the Savage started rapping at just nine-years-old, learning to handle his own in the studio at that age as well, thanks to his elementary school having their own. While he was interested in music at a young age, reality got the best of him when he was 15 and sentenced to 10 years behind bars. After serving seven, he was released and paroled at 22. It was then he really started to focus on music, knowing it was the one thing that could keep him focused and in a good place. Now he’s ready for the world to not only hear his story but embrace his music with his debut, “Bow Down.”

Also, King James the Savage isn’t trying to play and be like a certain basketball player. His mother named him King James. So yeah, it’s far from a nickname – it’s his birthright.

Those interested in adding new hip hop to their playlists, reviewing “Bow Down,” or interviewing King James the Savage can reach out via the information provided below.

To check out “Bow Down” by King James the Savage, visit: https://song.link/qw29MfCrbFZ63

About:
King James the Savage delivers straight fire with his debut single, “Bow Down.”