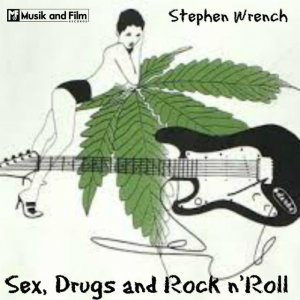 Casual fans rarely wonder about the songwriters behind their favorite tracks, but true music obsessed listeners live for that sort of stuff. It’s easy, perhaps too much so, to hear a catchy song on the radio sung from a first person point of view and assume it’s a product of the singer’s imagination and life experience. This isn’t always the case. Songwriters like Stephen Wrench rarely receive the plaudits they rightly deserve and, after over half a century performing music for a wide variety of audiences, Wrench is reaching out again with upcoming live dates and a plethora of material on his personal website that makes the case for him being one of the pre-eminent independent songwriters working today. He has a naturally collaborative spirit that’s succeeded in attracting some of the best talents in multiple genres to work alongside him and their contributions have enriched his work and give it an unique interpretative spin.

His song “Sex, Drugs, and Rock n Roll” is emblematic of his talents. The music never overreaches for effect and, instead, is built on a solid structure of well recorded drums, clean guitars, and freewheeling piano. The piano lightens the song’s edges some and makes Wrench’s lyric about the pain our musical heroes experienced during their commercial heyday a little easier to digest. Wrench has great focus as a songwriter – this track, among the many others featured on his website, never waste a single word or note. The song “Plow” is co-written with his daughter Anna and features a much different sound than the aforementioned tune. Big, brash electric guitars dominate the track but are never too clichéd. The lyrical content, courtesy of his daughter, might surprise listeners given certain expectations they might have going in, but it’s quite an imaginative lyric that Wrench exploits to the fullest.

His sensitive side gets an airing as well. He’s joined on the song “I Just Knew” by singer Sarah Spicer and they duet together with a seamlessness that many other tandems would envy. The love song tropes you’ll hear in this song never risk heavy-handedness because the accompaniment is so sharply tailored to serve the singers and the lyrics are delivered with just the right amount of sentiment and taste. The acoustic version of “Don’t Try Tellin’ That to My Heart” has a naked vulnerability that will affect many while its fleshed out electric counterpart, once again featuring Sarah Spicer, fills in the spartan original with color and vibrancy that never sacrifices its aching spirit. His guitar work on “This Time” is quite melodic and his grizzled, highway-worn voice imbues the lyrics with the kind of soul we rarely hear anymore on the radio or from new artists. Some excellent backing vocals join him on the chorus. A little languid blues creeps into the songwriting on “The Grass Ain’t Always Greener” thanks to the barroom piano and lonesome harmonica wail accompanying the other players. These are fine songs that offer up examples of how Wrench’s talents cross genre lines without ever losing their core strengths. They will likely translate to stage performance with a minimal effort thanks to this quality and there’s little doubt that, when Wrench takes to the road for future live shows, he’ll draw from this impressive library to fill out his set. It’s must hear material for anyone who’s a fan of sincere, straight-forward songwriting.