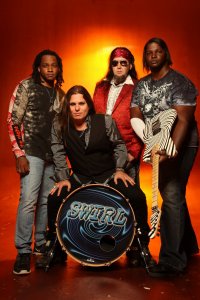 Swirl is a Southern California based hard rock/metal band pushing material that’s a mix of melodic hard rock and high octane metal distinguished by its energy, unquestionable musicianship, and rugged vocals. The band has undergone some personnel and stylistic shifts since their initial early 2000’s debut, but they hit upon the ideal formula for their talents with the 2016 release of a self-titled album. Vocalist Alfred Ramirez, guitarist Duane “DT” Jones, bassist Shane Carlson, and drummer Brian “Bam Bam” Jones are raising their public and artistic profile quickly with moves like the inclusion of three band songs on the Ditch Day film soundtrack. Their music is an excellent fit for the film and rampages with the best qualities we associate with hard rock and metal. This is the sound of a band hitting their stride and they leave you wanting more.

“Spell” is the first of the three songs included on the soundtrack and it’s a winner from the start. Shane Carlson lays down a crackling bass line and the band falls in behind him. The energy level is palpable. Duane Jones’ guitar work shows some inflamed flash at a number of points, but he never lets these moments dampen the direct attack and mastery of fundamentals that make his guitar playing so memorable. To put it bluntly, Duane Jones understands well what this music needs and gives it up in spades. Brian Jones and Shane Carlson make an impressive engine room for the band and the thunderous groove they lay down for the song never loses its way.

“Rise Up” is the shortest song of the three, only by a hair, and it has the band’s trademark focus honed to the sharpest of edges. Ramirez’s vocal swagger really comes through here, but the most remarkable quality of the track is how Swirl is capable of making accessible “messages” work so well within a hard-edged rock/metal musical context. The marriage of the two often sounds incongruous in the hands of lesser bands, but Swirl straddles these lines with unique confidence and attitude.

“We Are Alive” proceeds along similar lines. This is a particularly stirring tune, as well, but Swirl never sacrifices their hard rocking credentials in favor of hitting some plotted out high point. Instead, it all sounds like a natural outgrowth of their talents and experiences built on top of a mountainous rhythm section that propels the band headlong towards the finish line. Ramirez marks another high point with his authoritative vocal. Choosing these three songs for the soundtrack is astute because they are, arguably, the most representative numbers in Swirl’s slim but quickly growing catalog. This is certainly a band worthy of any hard rock/metal fans’ attention, they bring the heavy and melodic together in a nice package, and there’s no doubt will be hearing more from them over time.