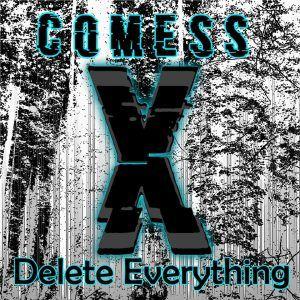 Last year Comess dropped his debut, ‘CreAtuREs of No habiT,’ and he’s already back with 2020’s LP, ‘Delete Everything.’

‘Delete Everything’ features 11 tracks that showcase the direction electronic music is heading. With an insane amount of energy-packed within the confines of this album, audiences will do nothing more than go wild when any one of these tracks are presented to them. For Comess brings his best unique style that is a blend of dark bass and melodic dubstep in many different forms. From the pulsating ways of “Idk” to the myriad of emotions felt during “Don’t Wanna Go Home,” every track is on point and ready to stun.

Comess considers himself an upcoming artist and while he may see himself as just starting out – his rise is coming fast. Released in early March, ‘Delete Everything’ racked up well over 11,000 streams in a mere two weeks thanks to fans from across the globe. Not bad for an independent artist on the rise. On top of being a dynamic artist, Comess is also a skilled producer who works out his tracks and shines when it comes to not only EDM but dubstep as well.

Within a year’s time Comess went above and beyond. He dropped ‘CreAtuREs of No habiT’ in 2019 and come 2020 was ready for round two with ‘Delete Everything.’ Today he’s focusing on his latest but is constantly working towards creating new music every day. There’s no shortage of EDM when it comes to what Comess can do.

Those interested in adding new electronic music to their playlists, reviewing ‘Delete Everything’ for their site or interviewing Comess for their site, on their radio show, or podcast can reach out via the information provided below.

About:
Comess is proud to announce his 2020 release, ‘Delete Everything.’