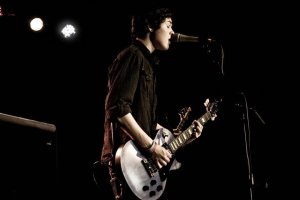 Trey Connor – While Everything Is Now

Detroit based singer/songwriter Trey Connor has put himself in a fantastic position with the release of his first solo album While Everything Is Now. While only twenty years old, Connor has ample experience fronting bands and has performed professionally since his thirteenth birthday. His debut studio release under his own name sets him up as one of the most promising young voices to come along in sometime within the pop rock arena. The six songs on this EP have varying levels of energy, but they sound life-affirming at even their most sedate moments. There’s no question, however, that this young man is out to impress. His guitar work is probably the most underrated part of his package since he is song-oriented and not inclined to pursue empty headed guitar heroics just to show off his virtuosity. It isn’t often that a first release from a recording artist shows such poise and self-restraint while still romping with youthful drive. While Everything Is Now fits that bill magnificently.

The first song is a real tone setter. “What You Are (My Spark)” is a lively love song with all of the flush-faced energy that anyone associates with those young loves. Connor, both vocally and musically, shows himself to be a vital performer even in the studio who effortlessly engages both the material and his audience. The EP’s second track “Stay” is a little more introspective and, as such, doesn’t immediately take the same zesty approach defining the opener. Instead, it takes its time building to an enormous chorus and an impressive assortment of big and small crescendos. Though flashes of his guitar skill come through on both of these songs, Connor wisely refrains from indulging himself on the instrument.

“Hold On” is less introspective than the preceding cut and takes a more universal approach. It is musically similar to “Stay”, but there’s definitely a sense here that Connor and his band members are more concerned with adding little bits and atmosphere to the song in a way they are not on the earlier numbers. “You”, on the other hand, ditches all the niceties and lunges for the listener’s throat. This is a gritty electric guitar driven track that howls with emotion in every line and has a dramatic musical arrangement certain to keep the audience on the edge of their seat. Acoustic guitar enters the picture on the penultimate track “My Ghosts” and Connor gives us his most sensitive vocal yet from, by comparison, much more demanding lyrics. He gives his performance a hushed theatricality that fits in quite good with the instrumentation.

While Everything Is Now ends with the song “Best of Days”. This is a light rock song, not quite as pop oriented as the first songs, but nonetheless it doesn’t pursue the same jagged ends heard on “You”. The song’s attitude makes for a welcome conclusion to the album. It’s fresher to hear a young performer with a rocker’s soul who still places such importance on melody and never drags listeners through the despairing poses and histrionics so common on first rock albums. The musical and emotional balance on While Everything Is Now makes for a great listening experience.